The Syrian efforts at reconstruction must be careful to avoid perpetuating the inequities that contributed to the conflict in the first place. A key aspect of this needs to be an improvement of the country’s housing, land and property (HLP) rights. Hannes Baumann is the editor of the Friedrich-Ebert-Stiftung’s latest publication Reclaiming home: the struggle for socially just housing, land and property rights in Syria Iraq and Libya. He spoke with us for FES’s regional website in the Middle East and North Africa. 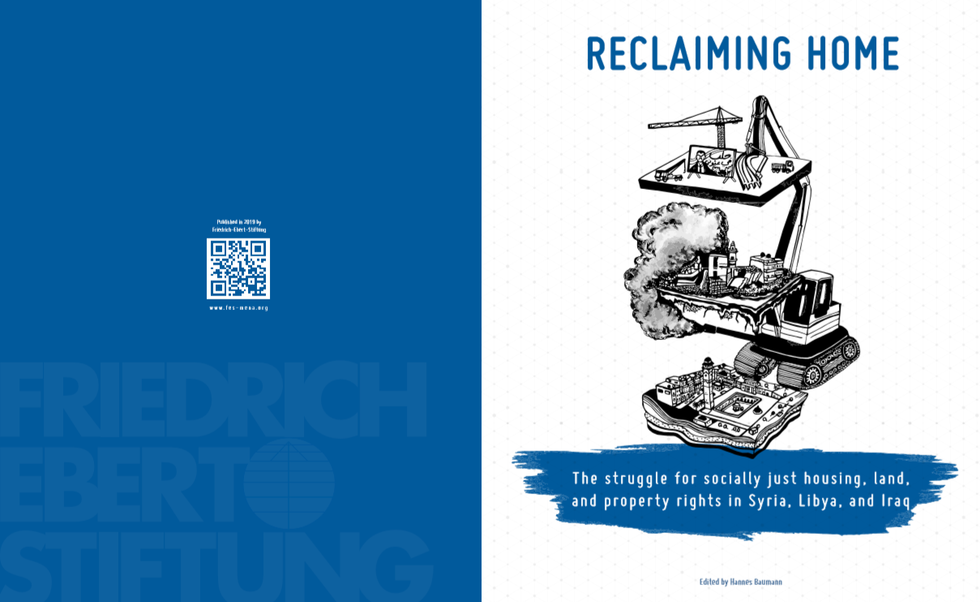 FES MENA: Can you briefly explain what HLP stands for and why does it matter?

Baumann: Housing, land and property (HLP) rights are more than simply property rights – whether you own a house or not. They include a variety of customary rights and informal claims. Many Syrians, for instance, hold no official property title to their land, houses, or apartments. Because they live in informal neighbourhoods, they rely on documents such as electricity bills or sales contracts. When properties are destroyed or when owners are displaced, the government then uses the formal framework of property rights against them: The Syrian regime has destroyed or withheld property documentation or has refused to accept evidence for informal property rights. In the publication we also look at similar issues in Iraq and Libya.

FES MENA: What is the relation of HLP to social justice in the three countries discussed in this publication?

Baumann: The political use of HLP rights is not exclusive to periods of conflict but it gains a new quality during a civil war. The authors of the study track ways in which rulers in Syria, Iraq and Libya were using authoritarian state power to reward supporters with HLP rights or exclude opponents even before the wars – sometimes along sectarian or ethnic lines. The authors therefore also track civil society initiatives that aim to fill functions the state fails to fulfil.

FES MENA: What are the main HLP rights violations the study covered?

Baumann: Each contribution has a specific focus. Leila Vignal explains the ways in which the Syrian government has abused HLP rights in its war against the opposition – and to subdue its population. Nour Harastani and Edwar Hanna surveyed over 100 Syrians to illustrate the various HLP issues they face. They are particularly critical of the Syrian regime’s “reconstruction” agenda and show how urban megaprojects are designed to expropriate potentially troublesome urban populations.

Other contributors look at specific locations in Syria. Javier Gonzalez argues that the Syrian government and Lebanese militia Hezbollah discriminate against particular sectarian groups they consider more likely to side with the opposition. Thomas McGee sees similar mechanisms at work in Afrin in Northern Syria, which is under the control of Turkey and allied local militias. In their efforts to control the local Kurdish population, they also frequently violate HLP rights. Ina Jahn and Amr Shannan provide the first in-depth look at how residents of Eastern Aleppo, when it was besieged and under opposition control, sought to provide alternatives to the state-controlled property registration process.

The contributions on Libya and Iraq focus on the failure to resolve historical violations of HLP rights. Suliman Ibrahim tracks the efforts by a Libyan pressure group to reclaim the properties that were expropriated under a Gaddafi-era law in 1978. Sangar Youssif Salih and Kayfi Maghdid Qadr record the frustrations of the Yazidi minority population in Sinjar province, northern Iraq. The genocidal violence they faced under the Islamic State group from 2014 to 2017 was part of a longer history not only of physical violence against the group but also HLP rights violations. Salih and Qadr argue that, since the fall of Saddam Hussein in 2003, the Iraqi state has failed to return Yazidi properties expropriated under the Ba’th party’s “Arabisation policy”.

FES MENA: How can this study be used as a reference in the reconstruction phase in Syria?

The violation of HLP rights has become part of the Syrian government’s reconstruction strategy. War profiteers are set to benefit, whether they are regime cronies at the national level or loyal militia at the local level.

The study highlights numerous other aspects that affect reconstruction. Sectarian or ethnic discrimination has intersected with HLP rights violations. Secondary occupation is a common phenomenon: Syrians who have been displaced themselves occupy properties abandoned by other displaced people. There are questions of how to deal with the efforts by civil society actors to replace state functions. All these issues impinge on reconstruction. Given that Bashar al Assad’s regime is using reconstruction to regain control over society, a socially just resolution of these struggles around HLP rights is seems unlikely right now. However, the role of the international community and donor countries might increase in the future, and those actors need to be aware of the situation on the ground, including the ongoing violations of HLP rights.

FES MENA: What are key recommendations for the international community or international NGOs to support local populations in their struggle to reclaim their homes?

Baumann: A key recommendation across all contributions on Syria is to avoid legitimizing the regime’s reconstruction agenda, which is set to perpetuate wartime and pre-war violations of HLP rights. Another recommendation is to assist documentation of HLP rights and their violations. This empowers citizens and civil society in their struggles for those rights. Apart from these concrete suggestions, the main contribution of this study is to document the complexities of the struggle over HLP rights, often in very specific locales. The purpose of HLP interventions during reconstruction cannot be simply to return to the pre-war status quo, because the injustices over HLP in those periods themselves fomented popular protest. The study therefore provides perspectives for both local and European actors to understand these struggles. This knowledge is indispensable to finding ways to resolve them in a socially just way.

Baumann is a politics lecturer at the University of Liverpool, researching and teaching on Middle East political economy. He has written a book on Lebanon’s post-war reconstruction through the lens of its key protagonist, businessman and politician Rafiq Hariri. Baumann brought his expertise in civil war economies and post-war reconstruction to the FES project on HLP rights in Syria, Iraq and Lebanon, coordinated by Thomas Claes the director of Economic Policies for Social Justice regional project at FES MENA. Baumann provided expert assistance in editing FES’ book with researchers from these countries and from Europe.