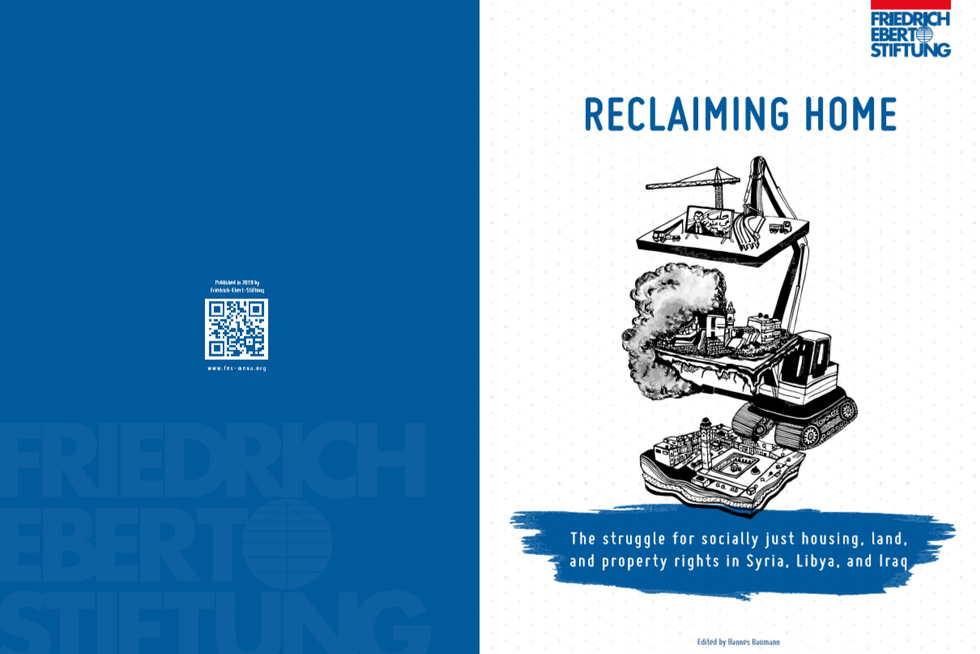 The destruction of civilian homes and shelters in conflict areas has devastating long-term consequences far beyond the end of the violence itself, and often impacts the already vulnerable the most. A new report by the Friedrich-Ebert-Stiftung examines the issue through recent cases in the Middle East and North Africa.

The wars in Syria, Iraq and Libya have displaced millions, both internally and across borders. Many of those displaced, especially from Syrian urban areas, lived in informal or self-built housing and often do not have reliable legal proof of ownership.

A new report by the Friedrich-Ebert-Stiftung (FES) discusses the details of several case studies in these regions, as well as possible responses. “The contribution of this study is to put housing, land and property (HLP) violations in Syria, Iraq, and Libya into their political and social context,” said Hannes Baumann, the scientific advisor and editor of the report, titled Reclaiming Home—The Struggle for Socially Just Housing, Land and Property Rights in Syria, Iraq and Libya. “The authors provide the locally specific insights that domestic and international actors need to be aware of to address HLP violations and work towards social justice,” he said.

For 18 months Friedrich-Ebert-Stiftung supported several architects, researchers and academics working on the study. The study was presented in Brussels on 19 September to various stakeholders by Thomas Claes, the director of the regional project Economic Policies for Social Justice at FES in the Middle East and North Africa and the authors of the study.

“We were extremely happy to see a growing interest in HLP from relevant institutions in Brussels,” Claes said. “We need to continuously observe the HLP rights violations and support Syrians in their efforts to document these rights. This is especially relevant in times when violations of HLP rights have become the norm in Syria.”

During the conflicts, most of the housing in rebel-held areas was informal, significantly increasing destruction and damage and other HLP rights violations in those areas, and turning this very directly into a question of social justice.

HLP violations do not start with the onset of conflict but war tends to intensify them and bring in new actors. In her chapter, Leila Vignal sets the scene by providing an overview of HLP violations in Syria. She identifies four modes of dispossession: as a military tactic, as an aspect of wartime economy, in connection with problems around title deeds, and resulting from wartime urban planning and regulations.

Another paper looks at how reconstruction is impacting HLP rights in Syria. “How are ordinary Syrians—both internally displaced persons (IDPs) and those who have sought refuge outside the country—affected, and how can they protect their HLP rights?” write authors Nour Harastani and Edwar Hanna.

Whether HLP rights violations are a cause, tool or outcome of war, they still bear vast importance for reconstruction of physical, legal and governance infrastructure. Overlooking the issue can reignite conflict, but by the same token a successful and just settlement of HLP issues can contribute to a sustainable peace. In his chapter on Iraq and Libya, Javier Gonzalez discusses how population displacement and violations of housing, land and property rights have been used as a weapon to reassert control of the area. Gonzalez argues that this process includes an attempt to consolidate the sectarian polarization to impose lasting control by the regime.

Overall, the struggle over HLP rights in Syria, Iraq and Libya continues, and involves a wide and complex range of actors. These include the warring parties and the displaced people, but also foreign powers, aid agencies and local and international organizations, Baumann writes in the report introduction. “The contributions to this volume provide an indispensable map for those who seek to navigate these struggles and work towards social justice in housing, land and property.”