At first sight, Libya does not seem to experience a strong outbreak of COVID-19. Currently, 34 cases have been confirmed, a first case was recorded on March 17. But testing capacities are low and the context of the civil war might provide a cover for the virus to spread silently. 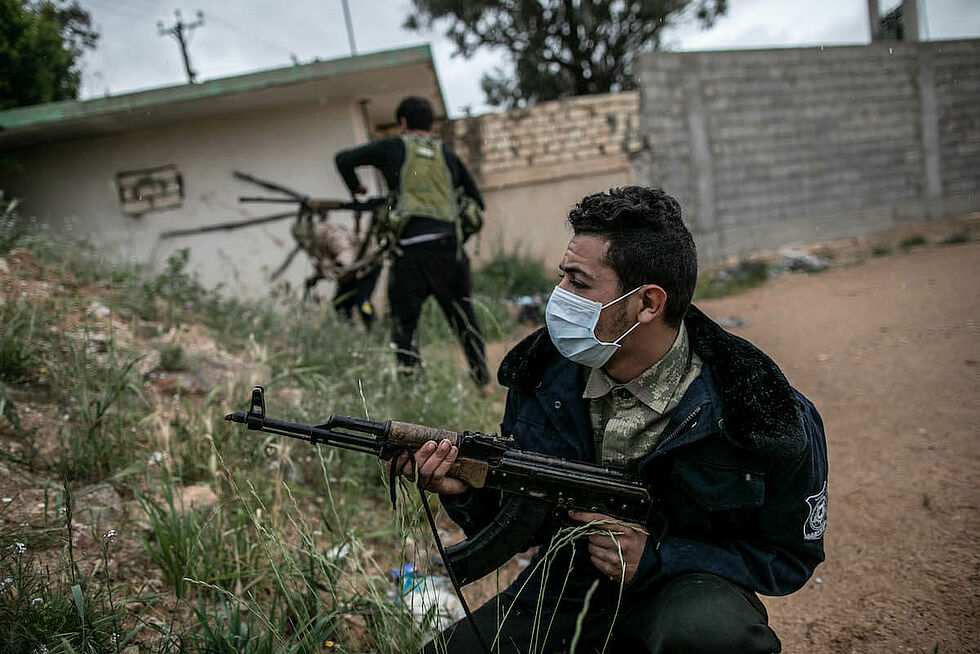 TRIPOLI, March 25, 2020 - A UN-backed Government of National Accord (GNA) fighter with a mask fires at LNA forces during clashes at Ain-Zara frontline in Tripoli, Libya, March 25, 2020. (Photo by Amru Salahuddien)

Libya is currently a divided country: The internationally recognized "Government of National Accord" (GNA) essentially controls the capital Tripoli and some surrounding towns, while the "Libyan National Army" (LNA, recently rebranded as Libyan Arab Army Forces, LAAF) of General Khalifa Haftar controls most of the east and the south. Both governments quickly imposed a lockdown and curfews on their citizens to suppress the spread of the virus. The National Center for Disease Control, nominally part of the GNA is nevertheless operating all over Libya. But against the backdrop of the year-long civil war which has been devastating the country, the global virus outbreak plays out with even darker repercussions in Libya: It provides cover for a military escalation.

After long periods of stalemate and many failed negotiations, a new escalation of the conflict was expected. Even the "Berlin Conference" hosted by Angela Merkel in January 2020 that aimed to bring together all foreign backers of Libya’s warring factions for the first time could not deliver a breakthrough. In early March, the UN Special Envoy for Libya, Ghassan Salamé, stepped down. Since this breakdown of international peace efforts, both sides of the conflict have received substantial military support from abroad. Turkey-backed the GNA with drones and anti-aircraft weaponry, breaking Haftar’s advantage in airpower. At the same time, the UAE started to send military supplies to the LNA via air. The UAE together with Egypt and Russia are the most important international supporter of Haftar.

With both sides well-supplied with weapons and their international backers in line, the COVID-19 crisis provided an excellent opportunity for military escalation. International attention has since mostly turned inwards to confront the health crisis, so both the GNA and the LNA escalated military operations without fears of diplomatic repercussions. It is obvious that in this context any serious national containment plan is doomed to fail. Soon enough, both sides started blaming each other for importing the virus to Libya through foreign mercenaries. Both sides have also issued statements to their foot soldiers not to use any military equipment or weaponry ceased from the opponents, lest it has been disinfected properly. COVID-19 has thus become just the latest addition to an ongoing information war aimed at discrediting the opposing camp.

But even before the latest rounds of fighting, Libya was ill prepared to face COVID-19. The health system, normally freely available to every citizen, has been decimated by the war. Many health facilities are damaged and closed. Specialized staff and protective equipment are lacking, while the remaining hospital beds are occupied by fighters and civilians injured by the war. Libyans used to seek medical treatment in neighboring countries such as Tunisia or Egypt, but after the closure of all land and sea borders, this has become impossible. In Tripoli, the hospital that was foreseen to treat COVID-19 patients is currently shut down after being hit by shelling by the LNA for three days.

If this situation was not enough to raise concerns, the water supply of the capital Tripoli and its three million citizens has been cut. Forces loyal to Haftar blocked the "Great Man-Made River" a network that supplies Tripoli with fresh water from aquifers in the desert in early April. Days later, a gas plant was attacked and shut down, leading to intermittent power cuts in Tripoli. Essentially, war crimes are being committed under the cover of the virus outbreak. With frequent bombings of civilian areas, many face a difficult choice between staying in their homes and being hit by shelling or leaving their home and being exposed to the virus.

The social situation in Libya has equally taken a strong hit: The fighting, even before the latest escalations, had already displaced around 150.000 people. The incomes of most Libyans have taken a hard hit in a year of fighting, where the current lockdown and rising prices for basic commodities will further push many families into poverty. Even worse is the situation of tens of thousands of mostly sub-Saharan migrants and refugees, crammed into detention centers after being detained on the Mediterranean by the EU-supported Libyan Coast Guard. If COVID-19 reaches the migrant detention centers, where humanitarian and hygienic conditions are already bad, the aftermath will be catastrophic.