How much will the so-called fourth industrial revolution change the way we live and work? How can we cope with these changes and how can we shape a just future world of work?

Globally, discussions around the “Future or Work” have resulted in the creation of a range of scenarios, from optimistic to pessimistic, with some predicting more flexibility, opportunity and productivity while others predicting a rise of inequality, job losses and a huge digital divide. Although the topic is trending globally and has made it into the agendas of the World Bank and Multilateral Development Banks as well as global summits such as the G7, G20, Labour20 and the World Economic Forum, major blind spots can be seen in the discussions around it.

These discussions have been driven by digitalization, automation and artificial intelligence, focusing on how such technological changes will affect the way we work. However, technological change is just one of various global megatrends that will have a vital role in the changes to come. Climate change, shifts in economic power, demographic change, migration and the closing of democratic spaces are all major contributors in shaping our future. Moreover, not only have the discussions been primarily shaped by male perspectives and have overlooked key feminist concerns and critique, they have also been narrowly focused on OECD countries, ignoring the majority of the global south and the unique challenges and opportunities that each region will be faced with.

In the MENA region, capitalist and neoliberal economic systems have contributed to high rates of unemployment, lack of decent job opportunities, increase of austerity measures, lack of adequate social protection policies and the spread of informal and precarious work. This has greatly perpetuated economic injustice across the region with women and marginalized groups being the most negatively affected.

Immediate measures must be taken to improve the current situation and mitigate the risks that are associated with the changes which the aforementioned global megatrends will have. In that context, a feminist lens provides a vital opportunity in formulating innovative visions and alternative macroeconomic policies that put social justice at the center and attempt to tip the scales towards less exploitation, more resources and less hurdles for all in the future world of work.

02.04.2020 | Political Feminism, Feminist Visions of the Future of Work | Publications

Research shows that the transition to a green economy will boost job creation; the global net job creation, considering losses from traditional energy… 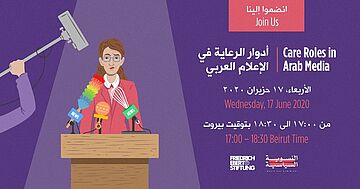 Under its regional Political Feminism project, Friedrich-Ebert-Stiftung (FES) is honored to invite you to a webinar on “Care Roles in Arab Media”…

In recent years, world leaders, economists, business owners, and tech giants have been discussing how the so-called Fourth Industrial Revolution1 will…