FES MENA interviewed Franziska Wehinger, the Climate and Energy Regional Project at Friedrich Ebert-Stiftung in the MENA region to talk about FES and local partners participation at COP 25 in Spain. 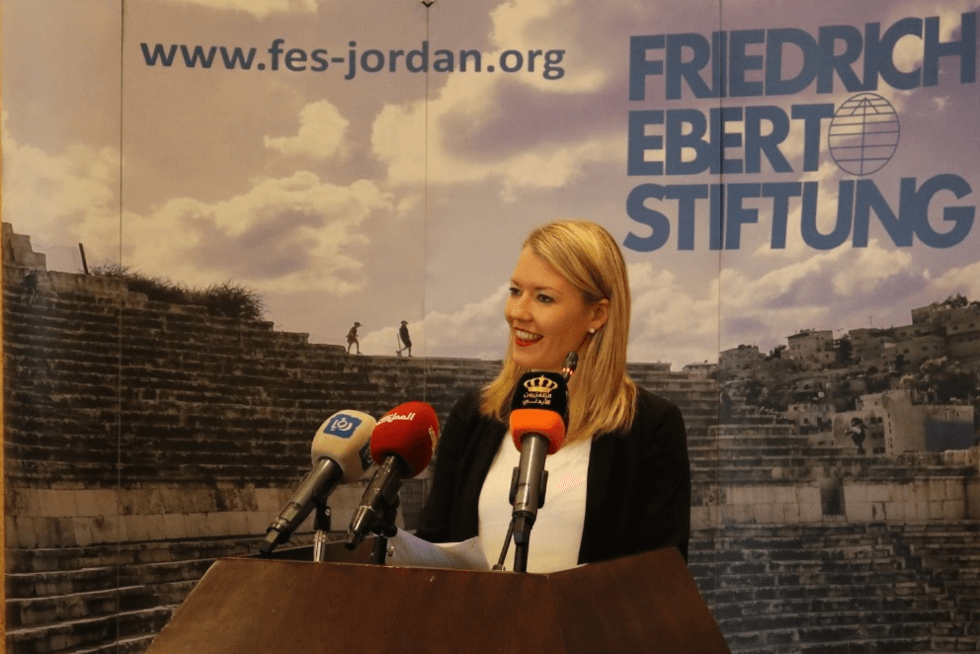 Tell us about FES MENA participation at the latest COP (24) in Poland – Katowice.

FES sends a civil society delegation of climate activists and climate academics to the world climate conference (Conference of Parties = COP) every year. At COP 22 in 2016 in Morocco the Arab climate movement started to gain traction after Climate Action Network Arab World (CAN AW) was founded with the support of FES in 2014. Ever since, FES takes CAN AW members plus a selection of young climate activists to COP in order to give non-governmental actors a voice.

At COP 24 in Poland, MENA region was again the least represented civil society group, in comparison to Europe, South America and Asia. Despite this our FES MENA civil society delegation becomes stronger. This year we will come prepared: We have successfully applied for five side-events where the activists will paint a different picture of the region.

I am also observing a positive change within the composition of climate movement in MENA and our delegations: there is more women than men as well as young people joining our delegation.

Tell us more about the youth participation.

There were not many “Fridays for Future”-protests in the world, but the Greta Thunberg movement has still reached the youth in this region. Youth in the region is strong in gathering knowledge and expertise in energy topics and is preparing counterarguments on why economic models in the MENA region need to be based on fossil fuels. This then needs to be translated in policies – something that is lacking often in the region. Therefore, FES have a ‘young energy expert’-training program, which trains youth in policies on energy transition and renewable energy. The demand for this program was incredible: we have received more than 300 applications and have then selected the 12 most qualified and talented young Arabs from 10 different countries.

This group has now written down their own vision of an energy transition on the MENA region – towards carbon neutrality.

Why COP matters? We had 24 COPs so far – US has dropped the Paris agreement. Does COP really make a difference?

COP stands for an alliance of “parties” (meaning states) that have agreed in Kyoto in 1992 to join efforts and combat climate change to prevent damages to the ecological as well as the human system that surrounds us. This agreement called “Kyoto Protocol” has then been put into international law with the Paris Agreement at COP 21 in 2015 in Paris. Hence, COP is not an ending process but an instrument to implement, first the Kyoto Protocol and now the Paris Agreement. We need it for two reasons: First, all parties promised to raise their targets in a five-year-cycle starting with 2020, at which point governments present their so-called national determined contributions (NDCs) and have to display how they have reached the set targets. But also, many points of the Paris Agreement are still unsolved: the question over loss and damage, carbon markets as well as the rulebook.

As long as we are still emitting greenhouse gases (GHG) (and we do that more than ever), COP is needed. Beyond the reduction of GHG, for poorer countries in the region, COP is a meaningful event in order to open financial channels with wealthier countries for support to combat extreme weather conditions, less agricultural production and sea level rise.

And of course, the US has dropped out of the Paris Agreement. That will not stop the rest of the world working together. In contrast, new alliances such as the China-France alliance are being created, the coalition of states and municipalities in the US that are more ambitious than ever, industries that aim at changing their production towards carbon-neutral and citizens all around the world to global action. Non-state actors are more important than ever.

Why is it important that civil society meet government and policy makers?

The participation of non-governmental stakeholders at COP, especially at MENA region is key. Since the League of Arab States is under the leadership of Saudi Arabia, Arab governments are hiding behind them. This does not represent the region though, as many of the resource-poor states have higher ambitions in reducing GHG than Saudi Arabia does. At the same time, these countries are facing more difficulties to adapt to climate change. The resilience towards flash floods, droughts and extreme weather conditions is much lower in countries such as Palestine, Jordan, Lebanon and Tunisia in comparison to the Gulf States. But poor Arab countries depend politically as well as financially on the Gulf countries. Civil Society can speak freer and more critical and challenge this geopolitical pattern.

Do these encounters have any effect?

We have organized many Pre-COP meetings in the region, where civil society meets governments in the prequel of COP. That is a good sign – it shows that governments are ready to meet civil society. Unfortunately, it is the environment ministries that are making many promises while the energy ministries are making the real rules and slowing down energy transitions in many countries. But this is not unique to the Arab World – we see this around the globe.