The boundaries between the living conditions under Kafala system and slavery are vague. 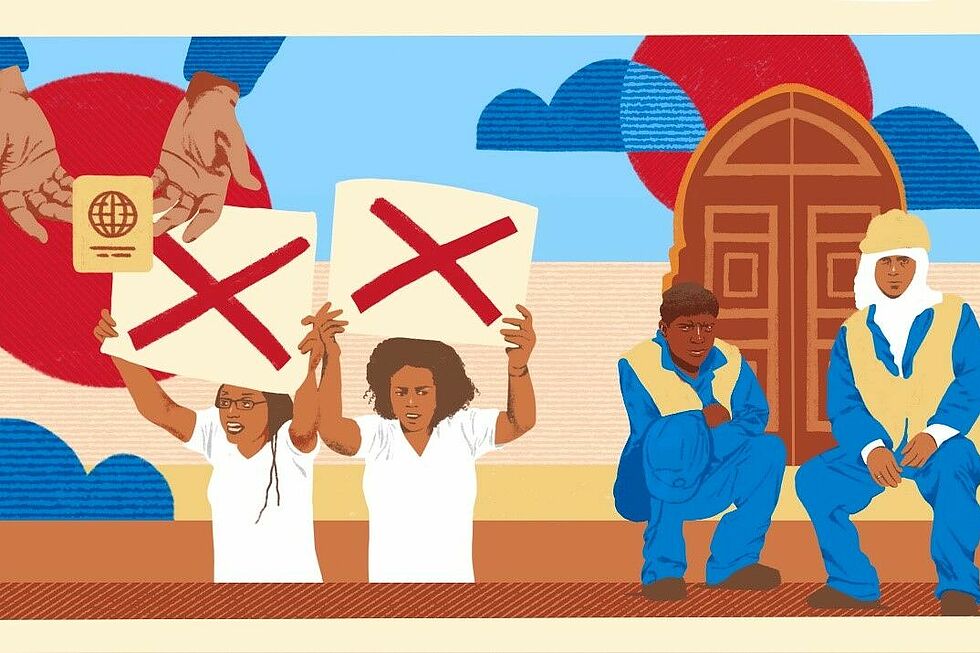 In an attempt to raise awareness about the harsh realities of the Kafala system, the Migrant-Rights.org collective released an interactive infographics entitled 'Life under Kafala: A Migrant Worker’s Perspective'.

In it, one is put in the body of a man who learned about work opportunities in the Gulf and decides to move there. From the man who recruits you and promises you a great salary to the kafeel (the sponsor) who takes away your passport, the infographics highlights the extensive network of oppression that maintain the Kafala system in the Gulf. The more difficult the working conditions get, the fewer the options to get out of them become. While this vary from country to country, which the infographics also highlights, the picture is never too far from being a textbook description of slavery.

The infographic is not the first attempt by activists in the Arab world to try and make citizens of countries that practice the Kafala system (Lebanon, Jordan and the Gulf countries) 'see' the horrors being inflicted in our names. Recently, a Lebanese campaign released a video showing Lebanese women in various roles of servitude, with their 'madames' (the name given to their female sponsors) being women from countries such as Ethiopia, the Philippines, Sri Lanka and so on. The idea of course is to appeal to the better angels of our natures, to tear at our heartstrings and see the Kafala system for what it is: a cruelty that must be abolished.

Over the past decade or so, there have been many of these campaigns in Lebanon, and as someone who's been writing about the Kafala system for the better part of that decade, these have become repeated deja-vus. While the campaigns have their merits, and the activists are of course well-meaning, one fundamental aspect of this entire story remains misunderstood, namely that the Kafala system is at the heart of the sectarian establishment that we rose up against on October 17th 2019.

As Lea Bou Khater, a Lebanese scholar who focuses on labor in Lebanon, noted: these initiatives frame solutions as individual initiatives ('raising awareness') rather than see them as direct failures of the Lebanese system. Migrant workers are not being abused only because there are many abusers in Lebanese society, but because they are legally forbidden from organising themselves to fight back against these abuses. The Lebanese government, after all, has refused to recognise the Domestic Workers Union (DWU) formed six years ago, despite its meeting all legal criteria. It has even deported the children of migrant workers, telling one DWU mother and worker, Renuka Irangani, that “you are here to work, and not have children."

At its 2015 inaugural congress, the DWU comprised of 350 domestic workers of various nationalities and was supported by the International Labour Organization (ILO), the International Trade Union Federation (ITUC), and the Federation of Trade Unions of Workers and Employees in Lebanon (FENASOL). Then-Minister of Labor Sejaan Azzi ignored their request for unionisation and later denounced it, with no evidence, as illegal. Subsequent Lebanese governments may have had disagreements, but they have all agreed that the greatest threat to the Kafala system is the organisation of labor. The fact that they have found it necessary to maintain the Kafala system should indicate that it is at the heart of the country's sectarian system. This is made more apparent once the links between sectarianian and both xenophobia and patriarchy are made clearer.

Kafala as a tool of suppression

The sectarian system in Lebanon relies on both patriarchal oppression of women/LGBTQs as well as the need to define one's community by the negation of another. It is the reason why sectarian politicians such as the Free Patriotic Movement (FPM)'s Gebran Bassil have long obsessively prevented Lebanese women from being able to pass on the nationality while citing Lebanese-Palestinian/Syrian marriages as their excuse. At the same time, Lebanese men who marry Palestinian or Syrian women can already pass on the nationality, while Lebanese women who do the same cannot. Therefore, this is not merely a sectarian 'calculation' (most Palestinians and Syrians are Sunnis whereas the FPM is Christian) but a patriarchal and misogynistic one as well. Simply put, the sectarian system must control women's bodies to reproduce itself.

This is also why it is so necessary for the sectarian establishment to exclude migrant domestic workers in every way possible, and to render their gendered labor, quite literally, invisible behind the closed doors of Lebanese households. Maintaining their exclusion is needed to create a gendered 'Other' reinforced by the equally socially constructed Lebanese 'madames' who get their identity through the submission of migrant women, and who can even appeal to a sense of 'whiteness' by oppressing the mainly black migrant domestic work force. The 'madames' can be of any Lebanese sect after all as they are primarily defined by their class rather than sect. (The male equivalent to this is the 'Sirs' or 'Misters', as that's how male Lebanese sponsors routinely demand that migrant women call them, but migrant women are regularly seen as the 'business' of Lebanese women given the gendered nature of domestic work.) In other words, submission is inherent to the process of the Kafala system and the latter could not exist without it.

This is also why, incidentally, the work of intersectional feminists in Lebanon who vocally oppose the Kafala system has been so crucial. In doing so, they articulate a vision of the country that is inclusive of a multitude of backgrounds that do not comfortably fit into a restricted identity promoted by sectarian warlords and oligarchs who in turn depend on its propagation for their own positions of power. Failing to tackle the Kafala system in our anti-sectarian demands risks reifying their 'Other'-ness as a necessary evil to unite the Lebanese against, just as the government and various sectarians and nationalists already do to Syrians and Palestinians in Lebanon. To put it simply, anti-sectarianism must also be anti-racist and anti-patriarchal or it risks simply creating a version of anti-sectarianism that is racist and misogynistic. Being anti-sectarian is not enough.

Thankfully, the Kafala system in Lebanon has been getting significantly more attention than it previously did, with 2020 getting even more than recent years. From the RAMCO workers striking to the Egna Legna Ethiopian feminists organising to support migrant workers regardless of nationality, the Lebanese response to these actions must simply be: how can we be fighting for our rights while their lives continue like this?

This is a question that Banchi Yimer, founder of Egna Legna, has been asking us. Yimer, herself a former domestic worker in Lebanon, described her working conditions to me as simply slavery, like 'going to prison without commiting any crime'. The prison here is the four walls of Lebanese households. More broadly, it can refer to Lebanese society as a whole which has been, at best, turning a blind eye to widespread abuses against migrant domestic workers, and especially black women.

For RAMCO workers, it is the fact that they cannot leave company grounds at any time. They have to live and work there. These workers, mainly Indian and Bengladeshi men, have reported being tortured and repeatedly beaten by Lebanese security forces as well as RAMCO bosses. They have even reported at least one murder attempt. In February of this year, 41 RAMCO workers were imprisoned in a room for three days, driven to the airport and then deported without even being able to fulfill their contracts. This reveals the interdependency of those tasked to implement the Kafala system, the employers, and the state allowing the Kafala system to exist in the first place.

Egna Legna activists are now focusing their attention on caring for workers who are being essentially dumped by their Lebanese employers in front of Ethiopian consulates. With the noted complicity of the Ethiopian government in Lebanon, Ethiopian workers are being left to fend for themselves in a country witnessing one of its worst economic crises in history. At the consulate, Lebanese and Ethiopian activists have unfurled a banner that reads "End Kafala" and "Repatriate", the two main demands of migrant workers in Lebanon at the moment.

It is worth noting here that Yimer has herself since also tried to appeal to the Lebanese by telling them that "they have been taking care of your kids, they have been cleaning your house, they have been taking care of your elders, of your family members who have medical problems." But unlike many Lebanese anti-Kafala campaigns, Yimer emphasized how dependent Lebanese society has made itself on Kafala workers. Perhaps none have put it more simply than one Lebanese man who simply said that "most Lebanese need domestic workers."

It is these seemingly inconspicuous declarations that reveal the most, and why I think that campaigns aimed at 'raising awareness' are not enough on their own. If we wish to stay faithful to the revolutionary process that we started last October, we must examine why the Kafala system was needed in the first place. The sheer scale of the abuses means that they couldn’t be possible without complicity at some level by wider society.