It had become a truism in Arab culture that the term "black" when referring to people with a swarthier skin than the Mediterranean, olive skin-looking Arabs, was considered a politically incorrect statement; opting instead for the more politically correct and sanitized version of "asmar" in Arabic (and its Turkish equivalent "esmer.") 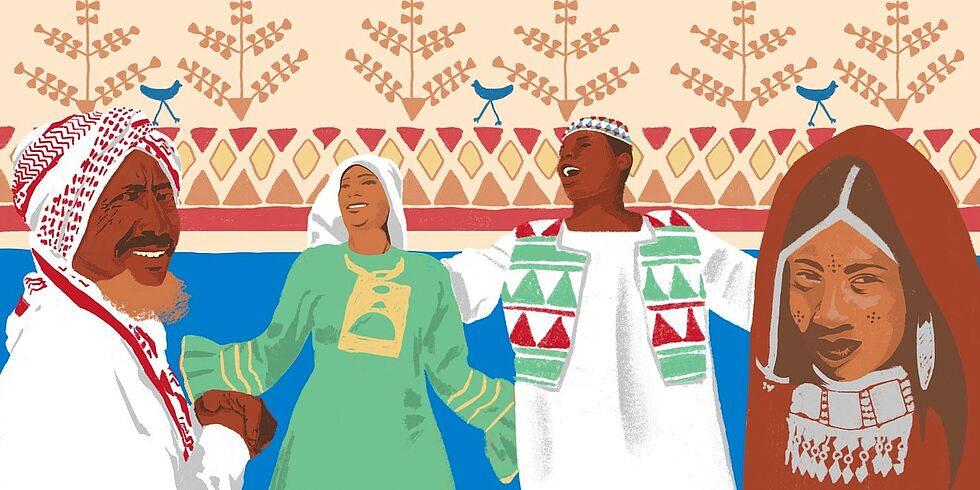 Well, that is not a historical understatement when one looks at the cultural and social connotations of the term "Black" when describing people of African descent in the Arab world. With the Black Lives Matter movement trending across the world, Arabs are left both bewildered and unable to engage in this world condemnation of anti-black racism. Recently on Twitter, Arab Lives Matter most reference the terrible plight besetting Palestinians, which again eclipses the plight of being black and Arab.

One must admit that the fall of the Ottoman Empire in the early 20th century and the resurgence of Arab nationalism in Arab countries in the 1950s and 1960s had been a catalyst in the eclipsing and the invisibilization of black minorities in the region. The category "Black Arab" may sound as anathema to the political unifying notion of Arabness, which purports to erase racial and ethnic difference for the sake of an imaginary homogenized identity, that stands in stark contrast to any attempt at the resurgence of Ottoman period cosmopolitan Arab societies.

The elephant in the room and the unresolved slavery legacy

Black populations and communities in the MENA region did not have to wait for George Floyd's death to become more visible or at least matter as full citizens in their respective countries. Many of them continue to be treated as second-class citizens if not as "subjugated or people under bondage" as in the case with the "Haratines" of Mauritania. The worldwide repercussions of Floyd's death have brought to the surface the muck lurking beneath the still waters of social and historical taboos about slavery, marginalization and discrimination of blacks who either were former slaves or are indigenous populations. The same taboos that makes it almost impossible to quantify the black presence in the MENA region for several reasons, mainly political, but also social and economic. This phenotypic ally visible minority had to be kept in the dark invisible from the public space, in education, politics, the economic and social spheres in their countries.

In Tunisia, it is almost impossible to get an official figure from the National Institute of Statistics of the number of black Tunisians today. This deliberate state blackout goes back to the early days of the establishment of the modern Tunisian state where the Bourguibist model of racial, ethnic and cultural homogenization was part and parcel of his project for the Tunisification of the newly independent country. From then on, racial statistics were banned under the pretext that this creates discord and division in the harmonious image of Tunisia (as marketed abroad by the regimes of Bourguiba and later Ben Ali as a way to show the West how his regime was able to crack down on any form of dissent, be it political or religious).

Tunisian civil society estimated that black Tunisians represent 10-15% of the total population, who remain almost invisible from any position of power, unlike African-Americans who represent about 13% of the population and yet they have formed a strong political, social, economic and academic lobby to empower their community since the abolition of slavery in 1865. It testifies to Tunisia failing to achieve that despite having abolished slavery two decades earlier. There is systemic racism and discrimination against black Tunisians in particular, as well as in North Africa, all share the same unresolved history of slavery that spanned centuries since the Middle Ages until today for Mauritania where officially slavery was abolished in 2007.

In neighboring Libya, things are much more complex when it comes to race relations and that predates the protracted conflict that ended the rule of Gaddafi. It is estimated that about a third of Libyans are black, who unlike their Tunisian neighbors are not homogeneous (being mostly of Sub-Saharan African slave descent), are ethnically diverse from the descendants of West Africa slaves whose ancestors were brought through the Sahara Desert to the different towns of Fezzan in the south, Tripolitania in the West and Cyrenaica in the east. The town of Tawergha, between the cities of Sirte and Misrata, represents the only towns with a black majority on the coast.

Its tragic fate has been linked to the conflict with neighbouring city of Misrata in 2011 when the former sided with the Gaddafi regime, leading to acts of vengeance from anti-Gaddafi Misrata forces and the forced displacement ever since. One of the reasons for such animosity towards Tawerghans from their neighbors of Misrata was these latter's anti-black racism against them. Yet, this is the tip of the iceberg of the bitter conflict: at tale of decades of bad blood between black Libyans in the small town of Tawergha, long time under-developed but that found support from Gaddafi through his Afro-centric rhetoric of empowering blacks in Libya, and the city of Misrata, which has witnessed the migration of Ottoman populations in the 18th and 19th centuries, making it a commercial hub in the southern Mediterranean region, and stood against any effort at their co-option by the Gaddafi regime.

Black Libyans of the Tebu minority who are have been living in the southern province of Fezzan for thousands of years and whose neighboring ancestral civilization of Germa (and its Berber origin) still stands and can be seen in the Akakus Mountains near the Algerian border. In the same region, in the heart of the Sahara Desert live the ancestral people of Tuaregs who inhabited the world's largest desert for the last 10 millennia and who are quite diverse ethically speaking with a dark-skinned minority that can be found in the town of Ghadames on the triangle border with Algeria and Tunisia. These same Tuaregs used to be active intermediaries with Arabs and Europeans in the trade of black Africans in today's Sahel region and whose transit points were the towns of Murzuk, Ghat and Ghadames in Libya.

In Egypt, the indigenous Nubian population of Upper Egypt has been a victim both of racism due to their skin hue, but also discrimination and marginalization of their cultural heritage, whose backbone is the Nubian language which is considered as an endangered language given the repressive policies of Arab nationalism of former president Gamal Abdel Nasser, who influenced Gaddafi a lot to set up his Arab Socialist Jamahiriyya led a ferocious Arabization campaign among the black Tebu population, as well as, the Tuaregs and the Amazigh minority groups since his rule in 1969 until his downfall in 2011.

The Ottoman legacy of slavery can be seen in modern day Turkey with the Afro-Turkish community that numbers a few thousands. They have been invisible from the public space until the establishment of the Africans' Culture and Solidarity Society by Mustafa Olpak -a descendant of Kenyan slaves brought to Crete- in 2006 and who coined the term Afro-Turk. Prior to that date, blacks in Turkey were either referred to as Arap (Arab in Turkish and which is still used as a slang to refer to black people). The term Zenci as an old-fashioned term has fallen out of favor for its racist connotation that goes back to slavery (the term comes from Zanzibar in modern-day Tanzania where many people were shipped as slaves to the Arabian Peninsula and the rest of the Ottoman Empire including Anatolia). After 2006, many Black Turks began to embrace their Africanness identity as part of their Turkish identity.

Many Blacks in the MENA region today claim their blackness in North Africa and their Africanness in the Middle East as an important marker of their complex identity and to hope for more visibility in a white society. This endeavor has not been easy as many are still struggling with the stigma of anti-black racism, colorism and discrimination due to their social and economic standing as still belonging in the lower stratum of society. Some are trying to accommodate themselves to their environment as a homogenized population, while rejecting their blackness to fit in Arab society. But many are embracing their difference as black or of African descent and attempting to reconcile with their white society. The rise of Obama as the first black president in the USA in 2009, the subsequent events of the Arab Spring with the winds of change offering a democratic platform for minority groups to speak out and the recent Black Lives Matter movement reinvigorated black minorities in the MENA region to display their black and Arab, Berber or Middle Eastern identity. It will take some time before these groups will succeed in building grassroots organizations that will do away with their societies' popular culture stigma about blacks as former slaves or domestic workers (as in the case in Gulf countries and Lebanon in particular) and empower them as future change makers in their countries.