Perspectives on the strategic implications of the US “maximum pressure” campaign against Iran. 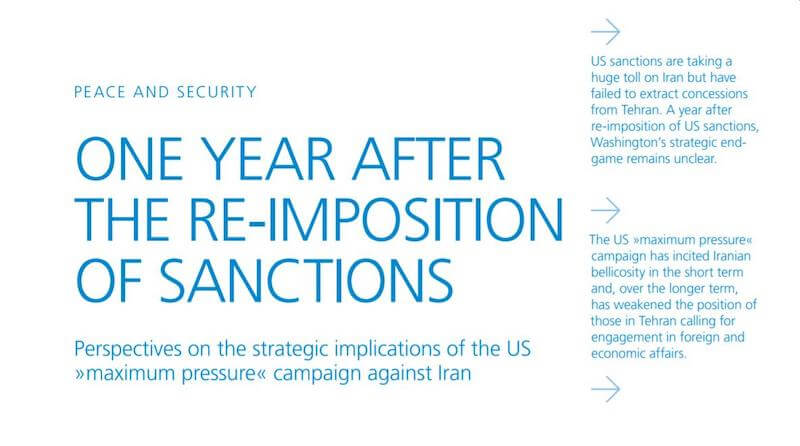 One Year After the Re-Imposition of Sanctions:
Perspectives on the strategic implications of the US “maximum pressure” campaign against Iran.

The FES MENA Peace and Security Project launched its new Iran publication in Berlin on November 4th. The edited volume sheds light on the current situation in Iran with respect to the domestic political situation, the state of the economy, and Tehran’s policy in the Middle East. It also discusses European and US approaches towards the country.

In the presence of the authors, key findings were presented and discussed with invited experts from the German policy community. Political commentary on the publication and the current state of European Iran policy was provided by Nils Schmid (Member of the Bundestag and Spokesman on Foreign Affairs of the SPD Parliamentary Group) and Michael Ohnmacht (Head of Middle East Division at the German Federal Foreign Office).

Key findings of the publication are:

US sanctions are taking a huge toll on Iran but have failed to extract concessions from Tehran. A year after re-imposition of US sanctions, Washington’s strategic endgame remains unclear.

The US »maximum pressure« campaign has incited Iranian bellicosity in the short term and, over the longer term, has weakened the position of those in Tehran calling for engagement in foreign and economic affairs. Europe is becoming less and less relevant to both Tehran and Washington. Although a European-Iranian foundation is lacking on which to build a joint strategy to salvage the agreement, there are steps Europe could take in order to advance its interests in the context of the nuclear deal.