In the framework of the regional project “For Socially Just Development – Economic Policies for Social Justice in the MENA Region” the FES office in the Sudan conducted a National Workshop in Khartoum on August 16 and 17. 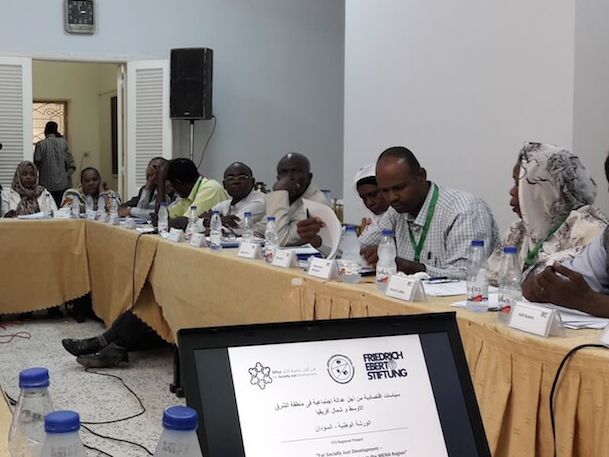 The event was organized in partnership with the Sudanese Elassima Center. The workshop gathered a large group of experts from very different backgrounds such as ministries, civil society, trade unions, political opposition parties, academics and represents of Farmer’s associations.

The program began with two keynote speeches on the 16th, by Prof. Mohamed Yousif Mustafa from University of Khartoum and by Prof. Hassan Bashir from Al-Neelein University Khartoum. They discussed social inequalities and social injustice as well as fiscal policy in Sudan. In the following discussion, most participants stressed the importance of discussions on the issue of social justice in the economic for Sudan and the whole region.

The second day of the workshop was started by Salam Said, the Academic Coordinator of the regional project, who presented the main ideas and aims of the project. In lively discussions well into the afternoon all participants commented on the points raised in the “Discussion Paper” on alternative economic policies for the region.

As immediate steps for an improvement of social justice and the overall economic situation in Sudan many participants proposed similar approaches: improve the lowest incomes, enhance vocational training especially for young people, improve food security for the poorest people, invest in new infrastructure in the regions, close loopholes for tax evasion. A large number of participants called for a revitalization for Sudan’s former very productive agricultural project, the Gezira Scheme between the two Nile rivers.

A very important question emerged at the end of the workshop and remained unanswered: How can Sudan begin benefit from globalization?