Under its regional Political Feminism project, Friedrich-Ebert-Stiftung (FES) is honored to invite you to a webinar on “Care Roles in Arab Media” which was organized in collaboration with Liberated-T. 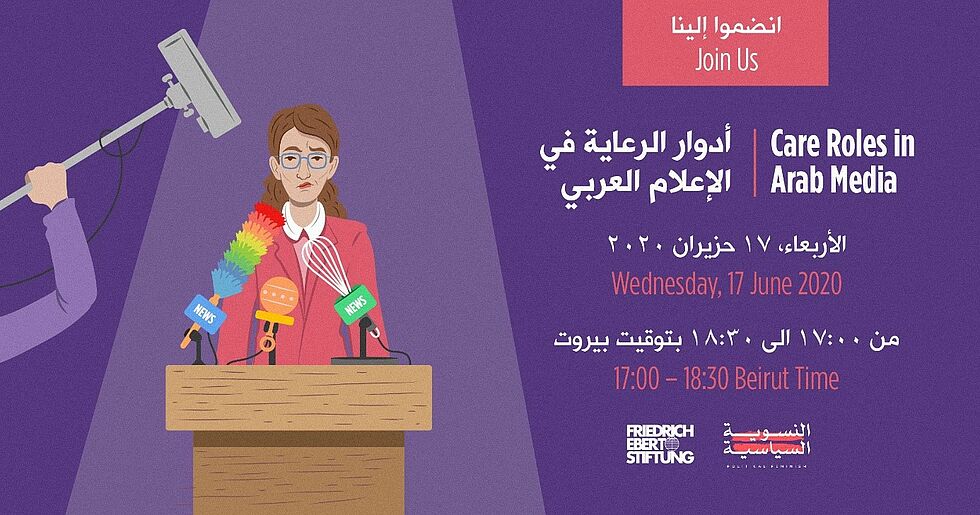 Mainstream media is mostly patriarchal, representing and responding to the communities it reports to. Therefore, women are being represented stereotypically as housewives and care givers which normalizes discriminatory perceptions on the gender division of labour. For instance, in media reports about women who have had success within the labour market, reporters would ask questions link "how can you balance between your work and your household duties?" spreading a narrative that questions a mother's role outside her home.

This webinar will explore whether the role of the media in emphasizing the stereotypical care-roles that are expected of women has been as persistent as it used to be, or if it has been changing in the past years, focusing more and more on women as independent figures.

Dr. Ebtihal Mahadeen is a feminist media scholar based at the University of Edinburgh, UK, and Managing Editor of Jeem.me, an Arabic-language platform on gender and sexuality. As a practicing media professional and scholar, she is keen to promote a better understanding of the interaction between the media and gender dynamics in the Middle East and has published extensively on the subject both in academic and non-academic outlets.

Roua Al Taweel is a freelance consultant and analyst working on gender issues. She has an M.A. in Women's and Gender Studies and has field experience in women’s activism, gender programming in developing countries, conflict zones, and refugee settings. For the past two years, Roua worked closely with Syrian media institutions to support them in identifying gaps and opportunities for gender equality both on structural and production levels. She uses her researcher skills and thorough experience as a gender specialist in her collaboration to provides the Syrian press with practical analytical and editorial tools to improve gender-sensitivity in reporting.

Rasha Al Aqeedi is Managing Editor of Irfaa Sawtak (Raise Your Voice) and a researcher and analyst of contemporary Iraqi politics and political Islam. She is also a non-resident fellow at the Center for Global Policy. Previously, Rasha was a researcher at the Al Mesbar Studies and Research Center in Dubai, and an analyst at Inside Iraqi Politics. Her work on Mosul and Sunni politics is frequently cited by The New York Times, Washington Post, APand Buzzfeed. Rasha received an M.A. in Translation, a B.A. in Translation, and a B.A. in Computer Engineering from Mosul University.

Zaina Erhaim is an award-winning journalist and feminist working as a Communication Manager with Institute for War and Peace Reporting. Among her awards is Rebel Woman for Peace By WILFP, and the journalist of the year by Reporters Without Borders. Zaina founded and is managing a feminist campaign to break the stereotyping of women in the MENA region, highlighting their roles and the gender-based discriminations they face. She has an M.A. in International Journalism from City University and has trained over 100 media activists on the basics of journalism in Syria. Zaina has also contributed to three books related to women and journalism in times of conflict.

Kindly let us know if you will be joining us by registering through this link.

This webinar is part of series of webinars and online meetings on care work in the MENA region which are conducted by FES under the regional Political Feminism project’s initiative on Feminist Visions of the Future of Work.