March 24 marked the 10-year anniversary of the height of Jordan’s “Arab Spring”. Despite the politically charged decade that followed, little has changed on Jordan’s opposition landscape. 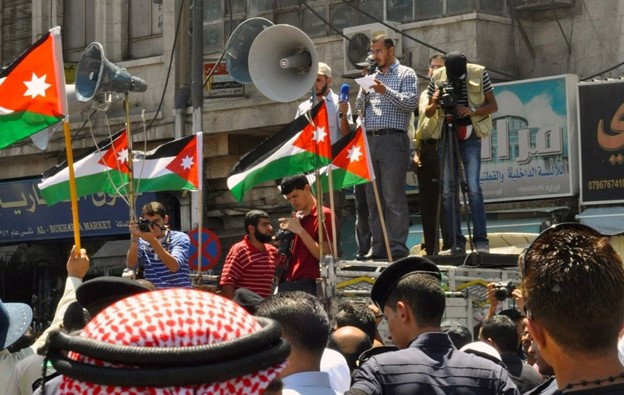 In an homage to the large demonstrations that took place at Duwwar Dakhaliyya (Interior Circle) on March 24, 2011, protestors descended on the busy traffic circle in the heart of Amman this week. This return to Dakhaliyya was supposed to be symbolic, but it also reflects the lack of progress made by Jordan’s opposition during the 10 years since the Arab Spring.

The decade since the “Arab Spring” has been highly consistent in Jordan. Protests have been a common feature of the political landscape, with large mobilizations occurring in 2016, 2018, 2019, and 2020. However, the plots of these frequent protests are all too familiar. When any opportunity for mobilization emerges, outspoken members of hirak seize upon it to take to the streets. These usual suspects congregate in the same places, call for the same litany of tired demands, and shout the same ineffectual slogans and chants. The protests at Dakhaliyya this week were consistent with this theme. They went to the same location with another shopping list of requests.

By drawing on the same old tactics, the protestors get the same old response. Once in the streets, they’re met by a human wall of state security. The protestors usually behave themselves, returning home obediently after hoisting platitude-laden placards. Sometimes the protests get rowdy, which results in calculated arrests followed by a protracted abeyance period. If the government suspects that the protesters will create problems (or they occur in the middle of a public health crisis), they may be stopped before they really start, as they were this week at Dakhaliyya.

The protestors have made little effort to innovate in the past decade (or more). They stick to contained, accepted behavior, rather than exploring new tactics that could create disruptions by breaking with routine and disorienting opponents and bystanders. Their reliance on familiar repertoires of contention is understandable. By employing the same, tacitly accepted strategies, both the protestors and the government enjoy a degree of comfort. If the agreed-upon protest script is followed, the government can play its well-rehearsed role and no lines will be crossed. Tactical innovation is also discouraged by a depoliticized national discourse, which stems from an unrepresentative electoral law, acute limits on political activism, and a broad cybercrimes law that inspires self-censorship.

In contrast to the implicit consensus around tactics, the opposition is less able to agree on demands, especially when protest numbers swell. Even though opportunities for mobilization are typically triggered by a single issue, they often encourage diverse, disconnected groups to demonstrate in support of one another. This diversity can result in a cacophony of different voices coming into competition with one another. Unable to unite under an umbrella leadership or master narrative, the protestors resort to a vichyssoise of poorly framed grievances that do not resonate across groups. As such, the demands tend to exacerbate rather than resolve fractures in the opposition ranks.

The divisions are partly a result of long-standing tribal, ethno-national, and ideological distinctions, but newer issues are also playing a crucial role. Key among these issues is class. The gap between middle and working-class Jordanians has grown wider in the last quarter century – and so too have their respective grievances. Middle-class Jordanians are increasingly unwilling to take risks to confront the issues of concern to the working class. And they certainly won’t do so in the middle of a pandemic. The proposed revision to the tax law in 2018 was one of the few issues that provoked the middle class to mobilize alongside the working class, as the proposed revision carried significant implications for middle incomes.

Class dynamics have also dictated which unions and NGOs mobilize. While Jordan’s teachers’ union has constituted a crucial feature of Jordan’s post-2011 political opposition, the more affluent, professional unions (such as those of the engineers and lawyers) have remained demobilized. Similarly, the interests of donor-driven NGOs based in West Amman are increasingly unrepresentative of working-class Jordanians. As such, many of the organizations that positioned themselves at the forefront of the income tax protests chose not to support the teachers’ union or other, more working-class causes.

A generational divide is also growing. The aging opposition has failed to attract a younger cohort to its ranks, owing to poor messaging and a reticence to listen to youth members. The story is similar among political parties. The parties have not reached out to younger generations or engaged them in their decision-making processes. The youth also fear being used as political pawns by the established movements and parties. They have been burned this way before. In 2011, the Islamic Action Front attempted to commandeer the protest movement, but subsequently “abandoned the streets” to conduct separate negotiations with the regime. Likewise, many of the prominent leftist leaders were co-opted into the government, leaving their myriad supporters behind.

Disappointments linger in the minds of younger would-be activists, encouraging them to find meaning through other outlets. Having witnessed the futility of the mobilization merry-go-round (and the failures of the “Arab Spring” movements across the region), young Jordanians are increasingly reluctant to risk their futures to participate in fruitless protests. This feeling is buttressed by the fact that many of the key influencers who are pushing for ambitious demands and encouraging risky tactics are doing so from the comfort of their homes in Europe and Turkey. Predictably, youth participation was limited at Dakhaliyya this week.

Limited by its divides and lack of innovation, the opposition continues to repeat the same protest performances and be contained by the government. This will continue if the opposition does not carefully reconsider its approach, unite across its divisions, engage more effectively with youth, and take risks to disrupt the socio-political status quo.

Katrina Sammour is an independent researcher/analyst
E.J. Karmel is a PhD candidate at the University of Guelph in Canada